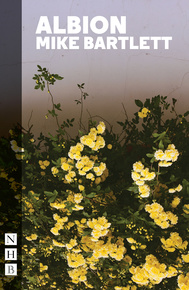 "It's England really, isn't it? A climate without cloud and rain isn't honest."

In the ruins of a garden in rural England, in a house which was once a home, one woman searches for seeds of hope.

Mike Bartlett's play Albion was premiered in October 2017 at the Almeida Theatre, London, in a production directed by Rupert Gold.
REVIEWS:

"Something remarkable. Our country needs it."

"[Has] a deeply reflective and humane quality to it: Bartlett draws his confused characters with a Chekhovian mix of wit and compassion... explores national identity through private mourning, and the meaning of the garden shifts, grows and deepens with the seasons."

"Scintillating... in the sometimes abrasive but always compelling Audrey, Bartlett has written a richly imagined female lead who can be mentioned in the same breath as the self-dramatizing Arkadina in The Seagull."

"A work of deeply absorbing emotional richness and symphonic density."

"Fascinating, complex... what makes the play so enormously intriguing is that, as in his King Charles III, Bartlett shows us as a deeply divided people torn between the urge to preserve the past and to radically reform it."

"A meditation on family and friends, false hopes and busted dreams."

"Bartlett pays homage to Chekhov, matching his sense of domesticity's mixture of stultifying banality and desperate strangeness -- while also calling to mind the wistful cleverness of Tom Stoppard's Arcadia... shot through with shrewdly observed humour, and there are moments of vivid poignancy."

"Smartly distils troubled England down to an elegiac microcosm... a thoughtful, layered interrogation."

"An intensely felt, delicately observed drama spanning a century of social change, that coaxes into blood-red bloom affecting ideas about home, identity, and love... a hybrid of earthy sensuality, sentimental nostalgia and damaging emotional frigidity that is peculiarly English. It's a domestic drama painfully ripped up by its roots, a depiction of modern England's dreaming full of hopeless longing, fear and despair... while the setting appears genteel, the drama goes for the gut. It's gloriously rich, achingly sad, and quite beautiful."

"There's something of a Greek tragedy in the primal forces that are unleashed... Bartlett reveals an ability to create a surging family saga, full of big emotions and high feelings... he keeps the tone funny, even as the mood turns dark, which is a rare skill."

"A tragic comedy which is bright with insights and one-liners... Albion is breathtaking in its ambition and at its best achieves a neat balance between believable family drama and a more metaphoric state-of-the-nation resonance. It's enjoyable, humane and highly symbolic."