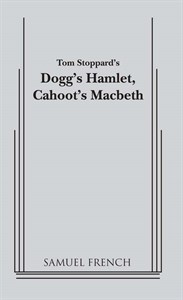 This clever romp is two short plays. In the first, a troupe of English schoolboys (played by adults) speak in a mock language called "Dogg." This hilarious language babbles along until the schoolboys, who are studying Shakespeare's "foreign" language, present an incredibly funny 15 minute version of Hamlet and then encore with a two-minute version!

The second play, dedicated to dissident Czech dramatist Pavel Kohout, is about a performance of Macbeth he and his friends once staged in a living room since the government banned public performances. The action shifts between the bare stage and the police inquiry. The murder and intrigue of Shakespeare's play are juxtaposed with the Czech political harassment.

The two parts must be performed together and may not be done with any other play.
REVIEWS:

"The language and the laughter are contagious...Lewis Carroll would have been at home."

"A blend of comic nonsense and astringent political satire."