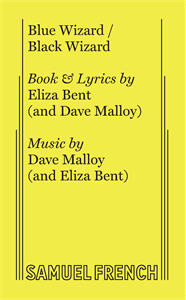 
Ancient ideals and modern musings rub up against each other in Blue Wizard / Black Wizard, a philosophical musical fantasia. Two referees adjudicate the proceedings as the Black and Blue Wizards battle to save themselves and humanity from the Great Mediocrity.

Warping the conventions of musical theatre and classic art song to intersect with the sensibilities of electronic music, Blue Wizard / Black Wizard is a pop culture smash-up of fantasy language and contemporary parlance. What unfolds is a ritualistic sporting event, the likes of which audiences have never seen.
REVIEWS:

"A mash-up of classical art, modern pop culture, depression inducing anxiety, electronic music, pole dancing, and mystical battles for the future of mankind's very existence [...] Beyond just a mash-up of themes, Blue Wizard / Black Wizard is a mash-up of forms [...] It's strange and funny and sad in a way that only this generation can be."

Premiere Production: Blue Wizard / Black Wizard premiered at the Incubator Arts Project in Dec 2013 and the Other Forces Festival in 2014 under the direction of Dan Safer.