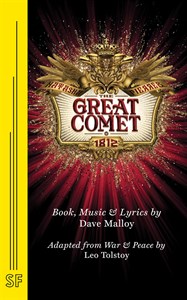 An electropop opera ripped from a slice of Tolstoy's War & Peace.
This show is currently unavailable for licencing. To be informed as soon as it's available, please contact our office to join the waitlist.

From the celebrated and award-winning composer Dave Malloy comes Natasha, Pierre & The Great Comet of 1812, an electropop opera based on a scandalous slice of Leo Tolstoy's War & Peace. Young and impulsive, Natasha Rostova arrives in Moscow to await the return of her fiancé from the front lines. When she falls under the spell of the roguish Anatole, it is up to Pierre, a family friend in the middle of an existential crisis, to pick up the pieces of her shattered reputation.
Following a critically acclaimed premiere at Ars Nova in New York City, a subsequent Off-Broadway transfer, and opening on Broadway -- this award-winning musical expands the possibilities for the genre with its daring score and bold storytelling.
REVIEWS:

CRITIC'S PICK! "A witty, inventive enchantment from rousing start to mournful finish. It is both the most innovative and the best new musical to open on Broadway since Hamilton!"

"5 Stars (out of 5) [...] Dave Malloy's Natasha, Pierre & The Great Comet of 1812 feels like a party from start to end: lively, intelligent and utterly engrossing [...] The dazzling variegated score - which covers musical terrain from folk songs through rock, R&B and house music - captures their story in stirring and surprising ways; [...] this is a rare and marvelous event: amid the din of New York, an oasis of artful illumination."

"Inventive, ravishing and full-on romantic! [...] Appearing out of nowhere to brighten the theatrical season, this thrilling new show relies on ambition, ingenuity, craft and heart."

"This astonishing new musical adapts a 70-page section of [War and Peace], mashing up imperialist Russia and an eclectic range of style,turning Tolstoy into a swoon-worthy, vodka-soaked party. It's a sensual, wild ride: rollicking music, beautiful singing, a feast for the eye, ear and mouth."

"Dave Malloy may be a genius."

Premiere Production: Natasha, Pierre & The Great Comet of 1812 premiered at Ars Nova in New York City in October 2012, under the direction of Rachel Chavkin.