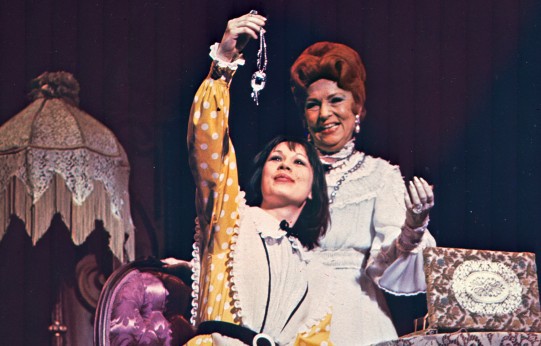 Based on Colette's novel and the 1949 motion picture, Gigi transports us to the elegant atmosphere of Paris in the 1890s. Lerner and Loewe's exquisite music provides the perfect foil for this romantic show set in Paris in the 1890s.

Gigi takes place in the city of romance, Paris, around the turn of the twentieth century. The tale is narrated by the distinguished Honoré Lachailles, a confirmed bachelor who has seen much of life in the Parisian aristocracy and is particularly wise in the nature of women (Thank Heaven for Little Girls), love, and marriage.

Honoré has a nephew, Gaston, who is extremely wealthy, handsome, and the object of desire of half the women in Paris. However, poor Gaston, for all his riches and attention, finds life quite dull (It's A Bore). He is courting the beautiful but spoiled Liane D'Exelmans who, rumor says, has been carrying on with her skating instructor behind Gaston's back. It looks as though Gaston and Liane's romance is about to fizzle, which leaves him even more depressed.

One of Gaston's few pleasures is visiting the humble home of Inez Alvarez, the grandmother of Gigi, and playing cards with the young girl. Although Gigi is just a child to Gaston, she has a refreshing and candid way of reacting to him that none of his paramours have possessed. In any case, he totally enjoys her company. Inez, or Mamita as she is called, has plans for Gigi to become a lady of breeding, and for assistance she has called on her sister Alicia, whose reputation in her younger days for pleasing her courtiers was beyond compare. Alicia takes pains to teach Gigi the difference between genuine gems and simulated stones, how to choose the correct cigar for a gentleman, and correct table manners for an elegant bill of fare. According to Alicia, pleasing a man is an art itself. Gigi finds the lessons pointless, but she has little choice but to learn what is expected of her.

As predicted, the romance between Gaston and Liane comes to an abrupt end when, at a party given by Honoré, Liane becomes infatuated with every man in the room except Gaston, and in a jealous pique, he pours a bottle of champagne down the front of her dress (She Is Not Thinking Of Me Tonight). The incident immediately becomes the talk of Paris, with gossips recalling the ladies Gaston has jilted in the past, and who his next love will be. Gigi overhears these conversations and is shocked that her mischievous, teasing card partner has such a roguish reputation.

At Honoré's suggestion, Gaston begins courting a different lady every night, as not to appear distraught from his parting with Liane. He confesses to Gigi one evening, however, that he is weary of this meaningless show for appearance's sake. Although he is due to attend a party in his honor that evening, he decides in favor of staying with Mamita and Gigi for dinner and more cards. As all three have had a bit too much champagne with dinner, Gigi playfully makes a bet with Gaston that should he lose the game, he will take her and Mamita to Trouville by the sea for the weekend (The Night They Invented Champagne). She wins, and he lives up to his part of the bargain. Their holiday proves to be the most delightful Gaston has had in years, and he finds himself looking at Gigi in a new light. While at Trouville, Mamita meets Honoré by chance, and they recall a romance between them many years ago (I Remember It Well).

Arriving back in Paris, Gaston finds he cannot get Gigi off his mind (Gigi), and decides to court her seriously. Both Gigi and Mamita are wary of this prospect because of Gaston's reputation with women, but Aunt Alicia is quite happy with the situation. She immediately begins to negotiate with Gaston's lawyers for a financial settlement for Gigi (The Contract), as she is to be Gaston's paramour.

Gigi, insulted by the arrangement, refuses to accept Gaston's company or money under the circumstances proposed. She later relents, however, as she tells him she would rather be miserable with him than without him (In This Wide, Wide World). Gaston, realizing how he has compromised her values, requests Gigi's hand in marriage, which she happily offers.