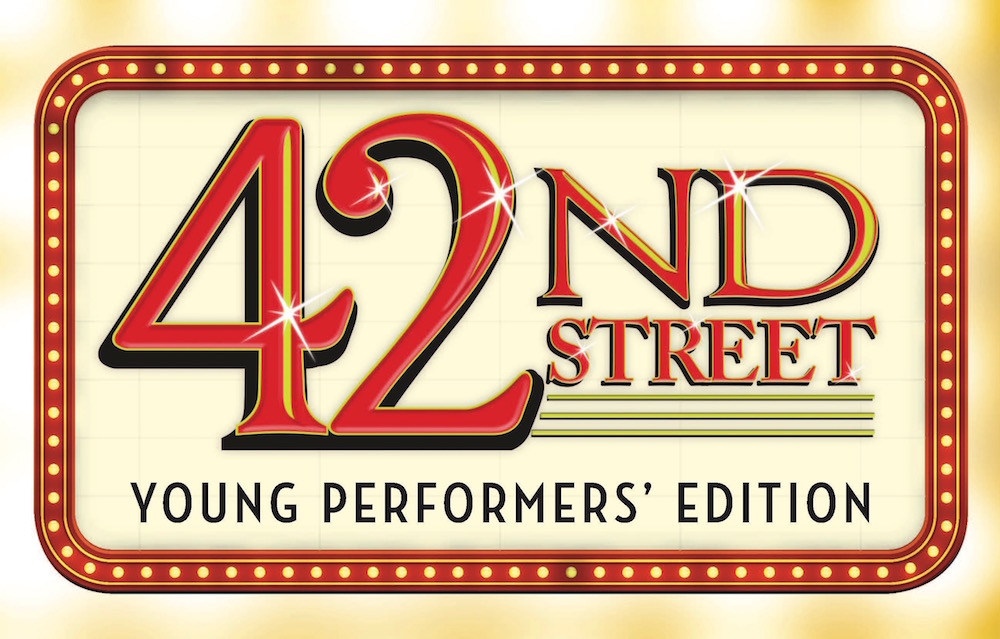 This Young Performers' Edition is a one-hour adaptation of 42ND STREET, specially tailored for elementary and middle school-aged actors. The materials have been prepared to help your school or organization mount the best possible production and to give your young cast and crew an exciting and rewarding experience.
The ultimate show-biz musical, 42ND STREET is a celebration of Broadway, Times Square, and the people who make the magic of musical theatre. Aspiring chorus girl Peggy Sawyer comes to the big city from Allentown PA, and soon lands her first big job in the ensemble of a glitzy new Broadway show. But just before opening night, the leading lady breaks her ankle. Will Peggy be able to step in and become a star? The score is chock-full of Broadway standards, including Go Into Your Dance, We're In the Money, Lullaby of Broadway, Shuffle Off to Buffalo and Forty-Second Street.

In New York City in 1933, dance director Andy Lee rehearses the chorus of a new show call Pretty Lady ("Opening"). The show's writers, Bert and Maggie, like what they see on stage, but they warn the dancers that at $4.40 per seat, the audience will demand some spectacular dancing. Young hopeful Peggy Sawyer arrives late, having missed the audition. Billy, the show's romantic lead, takes a liking to her ("Young and Healthy"), but she runs off, bumping into the show's producer, Julian Marsh. Julian tells Bert and Maggie he's worried about some of the cast, especially Dorothy Brock, the leading lady. Her last hit was ten years earlier, but her sugar daddy, Abner Dillon, is backing the show. When Dorothy and Abner arrive, Julian suggest that Dorothy audition, Abner reminds Julian that Dorothy does not have to try out for anyone, but Julian assures her he's just trying to determine if the show is in the right key ("Shadow Waltz").
Peggy returns for her purse, and Maggie invites her to luch with a few of the girls. As they settle in at the Gypsy Tea Kettle, the girls are astonished by Peggy's naïveté. They amusingly explain the Broadway facts of life, and dance back to the theater ("Go into Your Dance"). The number evolves into an audition for Peggy, who impresses Julian and lands a job in the chorus.
Dorothy and Billy begin rehearsing their big love scene. Abner objects to their kissing and insists they shake hands instead ("You're Getting to be a Habit With Me"). Peggy, weak and overcome by an exciting day, faints on stage. She is carried to Dorothy's dressing room, where Pat Denning, Dorothy's real boyfriend, is waiting. Dorothy walks in, and assumes Pat and Peggy are romantically involved. Julian, realizing Pat is a distraction to Dorothy, suggests Pat leave town.
The company packs up for Philadelphia ("Getting Out of Town"), and previews being ("We're In The Money"). After the first preview, Peggy invites Julian to join her at an impromptu cast party. Captivated by her charm, Julian decides to go. Dorothy, who misses Pat, gets into an argument with Abner. Abner threatens to close the show, but the kids talk him out of it. Pat and Peggy try to console Dorothy, but she assumes they are together, and ends her relationship with Pat ("I Only Have Eyes For You"). Meanwhile, Pretty Lady opens spectacularly. But when Dorothy rushes onstage for the Act I finale, Peggy accidentally knocks her down, injuring her leg. Julian, furious, fires Peggy and cancels the rest of the performance.
When a doctor declares that Dororhty's ankle is broken, Julian announces that Pretty Lady will close for good. The cast thinks that Peggy can save the day, however, and Julian finally agrees. Julian rushes to the train station to catch Peggy before she leaves New York. Telling her to "think of musical comedy, the most glorious words in the English language," Julian ultimately convinces Peggy to return ("Lullaby of Broadway").
Later, in Dorothy's dressing room, Dorothy admits she's been watching Peggy rehearse and she's impressed. She even gives a few pointers to enhance Peggy's performance ("About A Quarter to Nine"). As the opening curtain nears, Julian tells Peggy, "Sawyer, you're going out there a youngster. But you've got to come back a star!"
At long last, the Broadway curtain opens on Pretty Lady ("Shuffle Off to Buffalo"). Peggy, suddenly overcome with stage fright, freezes, but Julian removes her "Lucky scarf" and urges her onstage. Liberated from her superstition, Peggy gives a brilliant performance, and the show is a spectacular hit ("Forty-Second Street"). After the show, Julian congratulates Peggy, and she again invites him to the "kid's party." Left alone, Julian considers Peggy's offer, takes out her lucky scarf, and triumphantly tosses it over his shoulder ("Finale: Forty-Second Street").

42ND STREET opened on Broadway at the Winter Garden Theatre on August 25, 1980, starring Wanda Richert, Jerry Orbach, and Tammy Grimes. The production eventually moved to the Majestic and St. James Theatres, ultimately running for 3,486 performances.
In 2001, the first Broadway revival of 42ND STREET ran for 1,534 performance at the Ford Center for the Performing Arts, starring Kate Levering, Michael Crumpsty, and Christine Ebersole.