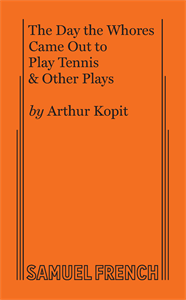 The business at hand is how to attack the men's ward before they attack the women and devour them like cannibals.


This strange meeting features The Woman in the Safari Outfit, the Woman in Armor (she has barracks language down pat, wears rusty armor, is called Joan of Arc and carries a big crucifix), the Woman with the Gavel, and others.

The business at hand now is how to attack the men's ward before they attack the women and devour them like cannibals. A ruse is needed so they kill the Aviatrix named Amelia Earhart. This exercise causes them to lose the strand of their thought and forgot why they did it.

Available in the collection The Day the Whores Came Out to Play Tennis & Other Plays.
REVIEWS:

"There's a lot of laughter."

"An intriguing and still topical allegory."