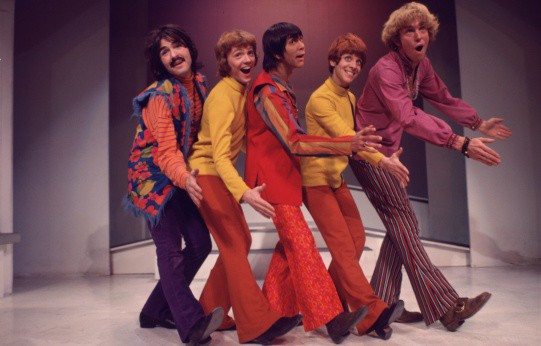 Your Own Thing is a rock musical loosely based on William Shakespeare's Twelfth Night. The show is set in the late 1960s, in the land of Illyria, which looks very mush like New York City. It is a tale of separated twins, mistaken identities, love triangles and "doing your own thing."

The show is set in the late 1960s, in the land of Illyria, which looks very much like New York City. It is a tale of separated twins, mistaken identities, love triangles and "doing your own thing." It opens when a raging storm wrecks a ship on which a rock duet is travelling. They are "identical" twenty-year-old twins, Viola and Sebastian. Even in this life-threatening situation, they are bickering as usual (No One's Perfect Dear). In the confusion of the ship sinking, the twins are parted. Viola lands in Illyria where, being told Sebastian drowned, she expresses her loneliness in the strange city (The Flowers). A mysterious stranger gives her a business-card with a job offer. The all-male rock quartet "The Apocalypse" is short one member since Disease was drafted to fight in Vietnam. Famine, War and Death all hate the idea of being forced into such a role (I'm Not Afraid/I'm Me). Disguised as a guy, Charlie, Viola auditions to become "The Apocalypse's" fourth member (Somthin's Happenin' (Baby! Baby!)). She is successful and joins the group, thanks to winning over their 30 year old manager, Orson.

Meanwhile, recovering in hospital from his shipwreck ordeal, Sebastian grieves his sisters death in the shipwreck (Come Away, Death). Realizing he'll have to move forward on his own, he goes in search of a job and a mysterious stranger gives him a business-card with a job offer. He meets up with Orson, who mistakes Sebastian for his twin, Viola/Charlie and confirms his appointment as the new member of "The Apocalypse". Sebastian is thrilled at getting a job to worry his new manager can't get his name right (I'm On My Way To The Top).

Orson is in love with Olivia, the 30-year-old owner of the nightclub where "The Apocalypse" is the star act. She doesn't want to see him so he asks "Charlie" to deliver a love letter to Olivia. Viola realizes that she also is falling in love with Orson (She Never Told Her Love). Inspired by her own situation, Viola advises Orson on how he should win Olivia (Be Gentle). Unfortunately, Olivia falls for Orson's messenger(s), not realizing the second "Charlie", who likes her, isn't the first, who didn't.

While the mixed-up couples continue their ever-changed yet confusing relationships, "The Apocalypse" set about rehearsals with their newest member (The Apocalypse Fugue), Viola's confusion continues (What Do I Know) and friendships grow (The Now Generation). As the confusion builds, the younger Sebastian acknowledges his growing love for the more mature Olivia (The Middle Years). Separately, Olivia also realizes that she is falling in love with the younger messenger (The Middle Years (reprise)). Meanwhile, Orson realizes that he has identified unexplainable feelings for "Charlie" (Young and In Love). The confusion builds (Hunca Munca) resulting in an argument between Sebastian and Olivia, which they eventually settle (Don't Leave Me). Finally, the mix-ups are resolved. The twins are reunited. Viola gets Orson and Sebastian gets Olivia (Your Own Thing).