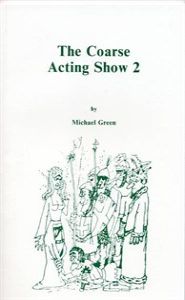 Last Call For Breakfast is full of symbolism, a short avant-garde piece made shorter by the simple mishapance of one of the actors getting himself in the wrong position during a black-out. Everything which can conceivably go wrong does so: sets collapse, actors fail to appear on stage, props fall to pieces, but the Coarse cast carry on, firmly believing that the audience won't notice a thing.

Contained in the volume The Coarse Acting Show 2 (Further Plays for Coarse Actors).