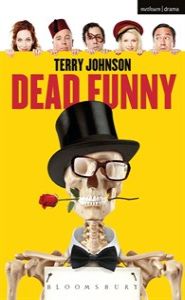 In spite of my desperation I have been patient, in spite of my bewilderment I have been understanding, in spite of my feeling of utter abandonment... I've been hanging on in there. Trying to help you come through this terrible thing.
The death of Benny Hill provides the impetus for this award-winning comedy about impotence, sex therapy and the English.

While Eleanor wants a child, her willing partner, Richard, is too busy running the Dead Funny Society. But in a week when British comedy heroes Frankie Howerd and Benny Hill both kick the bucket, the society gather for a celebration, which promises to be full of hilarity and laughter well, for everybody except the disgruntled Eleanor anyhow.

Terry Johnson's hilarious comedy of mortality and marriage was premiered at the Hampstead Theatre in January 1994. The second edition was published for the West End revival in October 2016 at the Vaudeville Theatre, London.
REVIEWS:

"A shetteringly good play, as hilarious as it is heartbreaking..."