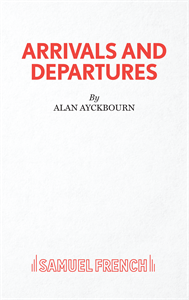 A poignant, timely comedy of two strangers meeting in the midst of an increasingly farcical anti-terrorist operation.

A terrorist code-named Cerestes is on the loose, and the police have planned a sting to capture him as he steps off a train at a London station.

The operation, led by the buffoonish Major Quentin, has drawn in two civilians - Ez and Barry. Perfect strangers as the play begins, their time waiting for the trap to be set gives them a chance to get to know each other, and try to make sense of the chaos unfolding around them.

Alan Ayckbourn's 77th play shows he has lost none of his theatrical inventiveness.


Premiere Production: The world premiere of Arrivals and Departures took place on 6 August, 2013 at the Stephen Joseph Theatre, Scarborough.