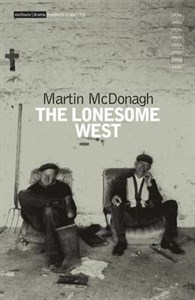 One of McDonagh's Connemara trilogy of plays. Two brothers living in their father's house after his recent death, find it practically impossible to exist without violent disputes over the most mundane and innocent of topics.

The Lonesome West was first presented as a Druid Theatre company and Royal Court co-production in the summer of 1997.

Valene and Coleman, two brothers living alone in their father's house after his recent death, find it impossible to exist without massive and violent disputes over the most mundane and innocent of topics. Only Father Welsh, the local young priest, is prepared to try to reconcile the two before their petty squabbling spirals into vicious and bloody carnage.
REVIEWS:

"The play combines manic energy and physical violence in a way that is both hilarious and viscerally exciting."