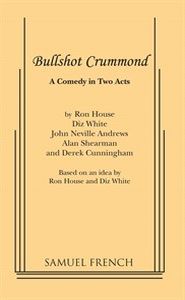 This parody of low-budget 30s detective movies typifies British heroism at its dumbest.


This parody of low-budget 30s detective movies typifies British heroism at its dumbest. Teutonic villain Otto Von Brunno and his evil mistress Lenya crash their plane in the English countryside and kidnap Professor Fenton, who has discovered a formula for making synthetic diamonds.

Bullshot Crummond is called to the rescue by the professor's daughter Rosemary. The two meet at the Carlton Tea Rooms, where Crummond is convinced that their waiter is Otto in disguise. The real Otto shows up, paralyzes Crummond with a fiendish ray and crams a stick of dynamite in Crummond's mouth that will explode when the next person enters the room. Rosemary enters, but the static electricity in her fur wrap averts the detonation.

Crummond and Rosemary pursue Otto and Lenya in a hair-raising car chase, only to plunge over a cliff. They survive and sneak into the dungeons of Otto's hideout -- where the professor is being tortured. Crummond loses the ensuing saber duel with Otto. Unperturbed, Crummond finally triumphs by shooting the rest of the cast.
REVIEWS: