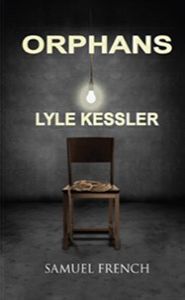 "A weird, wonderful thriller filled with suspense, pathos and packing an emotional wallop."

Broadway and Off-Broadway audiences gave this moving drama standing ovations. Orphans has been an international success throughout the world. Albert Finney won the Olivier Award in London's West End production.

Two brothers, Phillip, sensitive, reclusive, never venturing out of his North Philly home and Treat, a violent pickpocket and thief who kidnaps a mysteriously wealthy businessman who turns the table on the two brothers and in strange, hilarious and moving way, becomes their long lost father figure.
REVIEWS:

"Electrifying... Scorching... Making the descent from black comedy into tragedy in a bracing theatrical thrill ride... Wickedly funny one minute and powerfully emotional the next."

"Orphans has enduring appeal, its powerful theme of fathers and sons searching each other out. Alec Baldwin mines the vein of tenderness that lies deep in the play."

"Orphans will keep you laughing and crying. By far the best play I've seen this season."

PHILLIP - A Wild Child who has never ventured from his house.
TREAT - A Pickpocket and Thief, violent, suppressed emotions.
HAROLD - A Commanding Presence, able to handle any situation. Loving under a tough exterior.