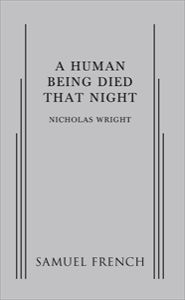 Human Being Died That Night, A

A stage adaptation of the book by Pumla Gobodo-Madikizela in which she interviews former South African police officer Eugene de Kock about his motives for his crimes against anti-apartheid activists.


Eugene de Kock was a paid white political assassin nick-named "Prime Evil" for his crimes against anti-apartheid activists. While serving his two life sentences, black psychologist Pumla Gobodo-Madikizela went to interview him hoping to seek humanity and forgiveness within the government-sanctioned monster. The thought-provoking interrogation moves from clinical to intimate in a cell where fear and compassion coexist.
REVIEWS:

"...quietly gripping...reveals in searing, sometimes heart-rending detail the atrocities committed by the South African police forces during the terrible years of apartheid."

"...scorching, vivid... This is not just two people. It is the old South Africa and the new South Africa. It is a test of them both, and of the limits -- or not -- of forgiveness and empathy."

Premiere Production: A Human Being Died That Night premiered at the Hampstead Theatre Downstairs in London in May 2013 under the direction of Jonathan Munby.