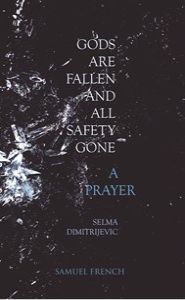 Gods Are Fallen And All Safety Gone

Intimate and funny, this play presents a lifetime of conversations, condensed into one hour.

Gods Are Fallen And All Safety Gone is an investigation into what happens when we discover that our parents are flawed human beings and that at some point, sooner than we think, they are suddenly going to disappear from our lives.

Published with the short monologue A Prayer.
REVIEWS:

"Quiet little punch in the face of a play."

Gods Are Fallen and All Safety Gone was first commissioned by and produced for Oran Mor's A Play, a Pie and A Pint season in 2007.
In 2012 Almeida Theatre commissioned Greyscale Theatre Company to create a new production of the show. In 2016 this production is still touring the UK and internationally.