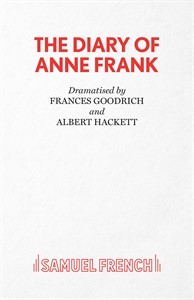 Diary of Anne Frank, The

Published long afterwards by her father, the only family survivor, it records the minutiae of twenty-five months that the two Jewish families spent in hiding from the Gestapo in an Amsterdam warehouse attic. The constant secrecy, growing hunger and friction of living in such cramped conditions could not dull Anne's vibrant personality or her passion for living.


Premiere Production: The Diary of Anne Frank was produced at the Phoenix Theatre, London, on the 29th November, 1956.