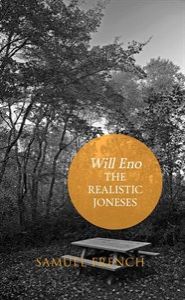 In The Realistic Joneses, we meet two suburban couples who have even more in common than their identical homes and their shared last names.

In The Realistic Joneses, we meet Bob and Jennifer and their new neighbors, John and Pony, two suburban couples who have even more in common than their identical homes and their shared last names. As their relationships begin to irrevocably intertwine, the Joneses must decide between their idyllic fantasies and their imperfect realities.
REVIEWS:

"Plays as funny and moving, as wonderful and weird as The Realistic Joneses, by Will Eno, do not appear often on Broadway. Or ever, really."

"Mr. Eno's voice may be the most singular of his generation, but it's humane, literate and slyly hilarious. He makes the most mundane language caper and dance, revealing how absurd attempts at communication can be. He also burrows into the heart of his characters to reveal the core of their humanity: the fear and loneliness and unspoken love that mostly remains hidden beneath the surface as we plug away at life, come what may... For all the sadness woven into its fabric, The Realistic Joneses brought me a pleasurable rush virtually unmatched by anything I've seen this season."

"Eno's dialogue is a marvel of compression and tonal control, trivial chitchat flipping into cosmic profundity with striking ease... there's much to savor: the dry but meaningful banter, the joy of humans sharing time and space, battling the darkness with a joke or silence. Life in Enoland isn't what you'd call realistic -- it's more real than that."

"...each line is sharply refined with dry wit and packed with underlying meaning. The characters are written with impressive realism..."

"Will Eno has written a play of such extraordinary wit and insight, so carefully constructed, resonates for days. Lines of dialogue peal through your thoughts like distant bells."

Premiere Production: The Realistic Joneses premiered at the Yale Repertory Theatre under the direction of Sam Gold, before appearing on Broadway in 2014.