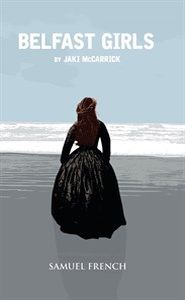 "I smell blood all over this ship. I smell two hundred women sick an' scared an' missin' bairns an' mothers an' fathers they're not supposed to even have. Can ya smell them? Can't ya hear them?"

Escaping the Irish famine in 1850 five young women seek passage on a ship to Australia. For many of the 'orphan girls' on board, the voyage offers a fresh start. But some girls find they cannot escape the powerful memory of the lives they've left behind -- and that the closer they get to Australia the more powerful the past becomes.

Jaki McCarrick won the 2010 Papatango Prize for New Writing got her play Leopoldville. Belfast Girls was developed at the National Theatre Studio, and was shortlisted for the 2012 Susan Smith Blackburn Prize and the 2014 BBC Tony Doyle Award.


Premiere Production: Belfast Girls premiered at the Kings Head Theatre, Islington, London on 1st August 2011, as part of the theatre's Monday Night Without Decor season. It was further developed at the National Theatre Studio, London in January 2012.