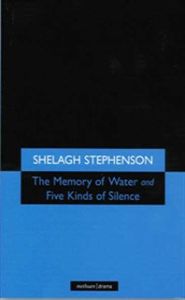 This highly-acclaimed stage version of the 1996 radio play in the story of a family in which control has become the driving force.

This highly-acclaimed stage version of the 1996 radio play is the story of a family in which control has become the driving force.

Billy controls his wife and two adult daughters to the extent that they can't leave the room without asking permission. He runs his family as a personal fiefdom, and the women are there to service him and his madness. He is violent, disturbed and sexually controlling. But he is also tragic, sad, a lost soul. One day his family shoots him dead.
The play shows us a distorted world of madness, control and despair through the eyes of dead Billy and those of his family, struggling to understand reality outside their stifling tomb.
REVIEWS:

"...brilliantly broaches a difficult subject... What is truly arresting and brilliantly intelligent about Shelagh Stephenson's award-winning [play] is how it handles the subject of brutal violence so quietly... all her characters are fleshed out with great truthfulness. Outstanding."

"A powerful and chilling new drama... an intelligently handled and thought-provoking play."