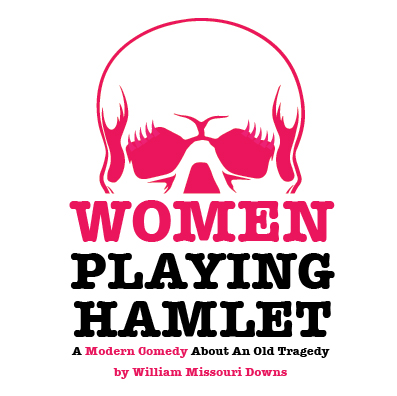 Fun for Shakespeare fans and haters alike, Woman Playing Hamlet is a modern comedy about an old tragedy.

Hamlet's a challenge for any actor, but when Jessica is cast as the titular character in a New York production, it sends her into an existential tailspin. It doesn't help that her acting coach is borderline abusive, or that every Starbucks barista with an MFA tells her she's too young for the role. Or that she's somehow managed to make Sir Patrick Stewart her nemesis. Not to mention the fact that she's a woman. How can Jessica figure out "to be or not to be," when she can't even figure out herself?

"With the colorful script and vivid characters Women Playing Hamlet is a slam dunk..."

"What's amazing lies in the script where Downs dissects Hamlet's intricate character and puts all aspects of Hamlet's persona in Jessica's challenge to scale the ladder to play the part."

"This wickedly clever new play from William Missouri Downs, dubbed 'a comedy about a tragedy,' uses an all-woman cast to explore question of courage and conscience in a modern setting, managing to both spoof Shakespeare and pay homage to him in a two-hour show that moves like lightning."

"Downs's script has... theater history and some of the eternal questions about playing Hamlet woven into its fabric, along with funny and sobering truths about the actor's life."