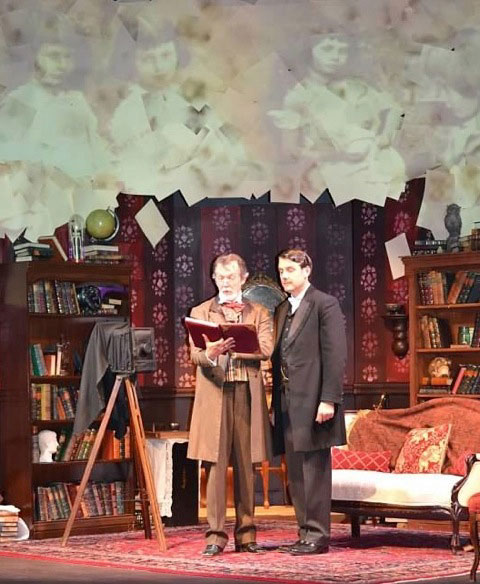 A hilarious and revealing conversation between two quirky, fascinating, and completely different men.


Reclusive writer and photographer Charles Dodgson (also known as "Lewis Carroll") invites celebrity author Charles Dickens to his Oxford home to pose for a portrait. Dickens is so intrigued by the whimsical Alice's Adventures in Wonderland that he accepts. What ensues is a baring of two creative souls, the one private and fastidious, the other boisterous and irreverent.

As Dodgson struggles to capture a "perfect likeness" of Dickens, Dickens craftily pries into Dodgson's personal life to get a handle on one of the most curious men he has ever met. The result is a hilarious and revealing conversation between two quirky, fascinating, and completely different men.
REVIEWS:

"Intelligent and imaginative... the playwright's ability to offer an enormous amount of information in a light and humorous manner... keeps the audience blissfully entertained while they're actually learning plenty... If you are a fan of Carroll and Dickens you will certainly love this play. If you are not, you will be a fan thereafter."

"You don't have to be interested in 19th century British literature to appreciate the play's odd-couple jousting and emotional poignancy."

"Beautifully appointed two-hander about the authors of Great Expectations and Alice's Adventures in Wonderland... Perfectly scrumptious."