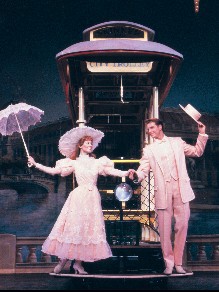 Meet Me in St. Louis

Meet Me in St. Louis is a rare treasure in the musical theatre, and is based on the heartwarming movie. Join the Smith family at the 1904 World's Fair, and see how their love and respect for each other is tempered with the genuine humor that can only be generated by such a special family.


Meet Me in St. Louis is the story of a happy family's life, as they anticipate the wonders of the 1904 World's Fair. The play includes seven of the best loved songs from the film and ten other wonderful numbers, also by Martin and Blane, written specially for the stage.

The Overture segues directly into the Opening Number - Meet Me in St. Louis, where we find ourselves in front of the Smith family home. The principals sings the title song introducing themselves (the Smith family Octet): Tootie, the youngest girl; Agnes, her closest sister; Lon, the son ready for college; Mrs. Anna Smith, mother; Katie, the family's Irish maid; Grandpa Prophater; Rose, the eldest daughter; and Esther, the second oldest daughter. We learn of their excitement about the fair, of Esther's crush on The Boy Next Door, and Mrs. Smith's advice to her daughter in You'll Hear a Bell.

Esther attempts to hold the family dinner an hour earlier that usual, in order to give Rose some privacy to receive a long distance phone call from a wealthy suitor, Warren Sheffield, who is vacationing in New York. Mr Smith insists on dinner at the usual time, and despite Katie's quick pace the plan fails. The whole family overhears Rose's disappointing call. The tone picks up quickly, and we find ourselves at Lon's going away to college party. Warren has returned from New York by now, and he and Rose sing the delightful A Raving Beauty. In Warren's refrain, she is "winsome, wise and easy on the eyes," and in Rose's tongue-in-cheek refrain he is "wayward, bad and all kinds of a cad."

With the party in full swing, Lon leads Warren, Rose and the Chorus in the rousing square-dance production number Skip to My Lou. Caught after bedtime watching Lon's party from the stair landing above, Tootie and Agnes are invited down to perform Under the Bamboo Tree as a vaudeville turn for the guests. When the guests go home, Esther and John are left alone. Although he is shy and a bit awkward, he manages to sing the touching waltz, Over the Bannister, to Esther as he helps her turn down the room gaslights. He then shakes her hand goodnight. She is disappointed by the handshake as any teenage girl would be, but shrugs it off with a reprise of The Boy Next Door and then The Trolley Song.

The Second Act opens on Halloween night in the kitchen, as Tootie and Agnes prepare to go out tick-or-treating. When Katie is left alone with Esther and Rose, she instructs them in the song and horn-pipe dance A Touch of the Irish on how best to handle romantic situations from a woman's perspective. Tootie and Agnes return unexpectedly, and Tootie mischievously places the blame for their early return on John Truitt. This, of course, complicates matters between John and Esther causing a misunderstanding and then an apology. John sings a reprise of The Girl Next Door.

Mr. Smith is offered a promotion at work, but it will require the family to move to New York City. Everyone is upset by this news and has compelling reasons for not wanting to leave St. Louis. Mr. Smith explains the benefits of the big city in A Day in New York, but Mrs. Smith is the only one willing to make the move. She explains her love for her husband in a reprise of You'll Hear A Bell, and he responds in their duet Wasn't It Fun?

The last big social event before the family leaves St. Louis is the Christmas Ball, a very formal party. Rose goes with Lon, but Esther is left without an escort; John did not get to the tailor in time to pick up his father's tuxedo. Grandpa Prophater saves Esther's evening by wearing his tuxedo and escorting her to the Ball. A prank Esther plans for Lucille, whom Lon admires, backfires on her, and Esther is forced to dance with three less-than-attractive men herself.

Everything works out well for the three young couples. John manages to get his tuxedo and unexpectedly arrives at the Ball. Later that evening, he and Esther decide they should wait some time before marrying since they are only "practically of age." They reaffirm their love in the beautiful duet You Are for Loving. Rose and Warren, and Lucille and Lon pair off for the duration of the Ball.

Back in the living room at home, Tootie is upset by the move away from St. Louis. Esther tries to comfort her with Have Yourself a Merry Little Christmas, but it is not until Mr. Smith announces that the move is off that everyone is truely happy again.

The scene and time change to Spring, and the chorus sings a reprise of The Trolley Song as everyone prepares to go to the World's Fair. The chorus is interrupted by the Smith Family gathering and singing a reprise of Meet Me in St. Louis. There is a blackout. Suddenly lights come up and we are with the Smith family observing the spectacular panorama of the 1904 World's Fair.


Premiere Production: Meet Me in St. Louis is the stage version of the memorable 1944 MGM motion picture. It played for 252 performances on Broadway at the George Gershwin Theatre starring Betty Garrett, George Hearn, Charlotte Moore and Milo O'Shea.