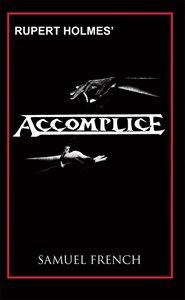 "A delight. It is humorous, odd, scary, wildly dramatic, adult, adolescent in short, impossible to dislike."

Accomplice begins as a straightforward English thriller in a country house. A sex-starved wife and her lover plan to murder her stuffy husband. The husband is murdered on stage, but reappears.
This is actually a dress rehearsal for an out of town try out and the murder victim is the playwright and director. He, however, is plotting to murder his wife, the leading lady in his play, so that his affair with her leading man can proceed unimpeded.
A surprise character comes out of the audience, revealing that something entirely different is going on: a cast member is being brilliantly and effectively set up in a retaliation for his cruel actions which caused the suicide of a friend.

This truly unique thriller by the author of The Mystery of Edwin Drood broke box office records at the Pasadena Playhouse and thrilled Broadway audiences.
REVIEWS:

"...a deliciously witty cocktail of a whodunit with a maniacally seamless plot where skullduggery emerges the winner!"

"A delight. It is humorous, odd, scary, wildly dramatic, adult, adolescent in short, impossible to dislike."

"Miss it at your peril."

"A breathless ride through an ever shifting series of planes."