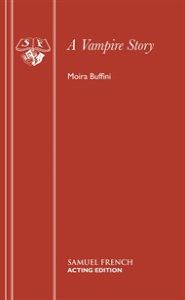 Two young women arrive in a nameless British small-town. Their names are not their own. They don't declare their ages. Their relationship with each other in not clear.

Two young women arrive in a nameless British small-town. Their names are not their own. They don't declare their ages. Their relationship with each other is not clear. Are they sisters, as their assumed identities declare? Or are they mother and daughter?

The eldest, Claire, takes a job in a pub. The youngest, Eleanor, goes to school. During a truth exercise in her Drama class, Eleanor confesses that she has been alive for over two hundred years and has survived by drinking human blood. Her classmates think she is utterly crazy and Mint, her teacher, puts her in touch with the school counselor.

She makes one friend, Frank, a boy who has been home educated and is as much an oddity as Eleanor. He tries to get to the bottom of her vampire delusion, thinking it an epic and compelling psychosis. Why would anyone want to be undead? Frank's parents believe that Eleanor is an anorexic - why does she never eat?

Eleanor has started to write her life story as a play. She describes Claire's background as a prostitute in 19th century London and her own as a child in a private orphanage. Meanwhile, things are falling apart. People are disappearing. Are Eleanor and Claire vampires? Or are they troubled young women on the run?

In 2012, A Vampire Story was adapted to become the horror film Byzantium.


Premiere Production: A Vampire Story was written for the National Theatre's Connections programme 2008. It has been performed by schools and youth theatres all over the world.