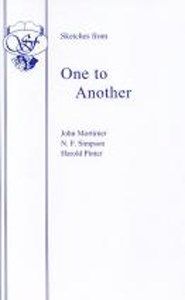 Triangle. CASTING: M2 F1
The Waitress studies her two regulars - one timid and uncertain, the other forceful and decisive. They both have powers to charm and as she serves them she dreams of life in their respective homes - the only snag is they are quite unaware of her aspirations.

Gladly Otherwise. CASTING: M2 F1
Into the lethargy of the Brandywine household comes the Man, a high-powered salesman. Within minutes he has them tied in knots, but when he removes his personality they sink back into domestic gloom.

The Black and White. CASTING: F2
Two old women, down-and-outs from London's Embankment and back streets, regale themselves with bread and soup in the early hours of the morning.

Trouble in the Works. CASTING: M2
Fibbs interviews Wills from the works and tries to plumb the mental depths of his engineering workers. After cutting his way through a jungle of technical jargon he discovers what they really want to make is brandyballs.

Cleaning Up Justice. CASTING: M1 F1
The court usher and the charwoman deplore the shocking goings-on of their betters who are brought to court - how differently and how happily they themselves have lived since they committed bigamy.

Collector's Piece. CASTING: M6 F4
When young Albert caught a Goat Moth in his father's garden it changed his life - in future he would study Nature. Unfortunately his life passes and death comes too quickly, for, at the end, all he has discovered is the Goat Moth.

Conference. CASTING: M3
The Tycoon interviews Jones, but he is such a popular fellow and so tied up with his telephones that a frustrated Jones retreats to a call box and winds up their meeting by phone to his own if not to the Tycoon's satisfaction.

Can You Hear Me?. CASTING: M2
Crob and Hud are staying in a reputable hotel but find the amenities leave much to be desired. When Crob feels the urge to have a speaking tube it is some time before it is supplied and then he finds it difficult to control.