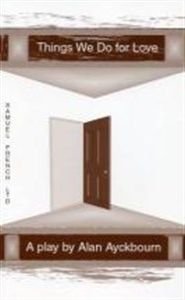 Things We Do for Love

"Handles a potentially tragic theme with a rueful comic zest... This is a Private Lives for the nineties."

An ingenious set greets the audience of this award winning play: the cross section of a Victorian house that has been divided into three flats.

The owner, a fastidious, elegant executive named Barbara, contentedly occupies the ordered, male free ground floor visible in its entirety. The basement ceiling can be seen and this is where, Gilbert, a boorish postman and handyman, is painting a nude study of his landlady.

Barbara is letting Nikki, a school-friend, and her fiance use the upstairs flat even though she has taken an instant dislike to him. Ever life's victim, Nikki is destined to suffer yet again when Barbara succumbs to an unexpected and violent passion.
REVIEWS:

"Handles a potentially tragic theme with a rueful comic zest... This is a Private Lives for the nineties."

Premiere Production: Things We Do For Love was first presented at the Stephen Joseph Theatre, Carborough, on 29th April, 1997.
A new production was first performed at the Yvonne Arnaud Theatre, Guildford, by arrangement with Michael Condron and Lee Dean, on 10th February, 1998 and subsequently presented by Michael Codron and Lee Dean at the Gielgud Theatre, London, on 3rd March, 1998.