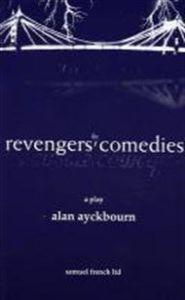 Henry Bell has come to the Albert Bridge to throw himself off because he has lost his wife and his job. Instead, he saves Karen Knightly who has thrown herself off the bridge already and is dangling by her caught coat.

They spend a long night driving. Henry learns that Karen has been jilted by a lover who has gone back to his wife. She suggests revenge as a way to heal their emotional wounds: she will fix Henry's dreadful former boss and Henry must ruin her ex-lover's wife.

Karen executes her part of the bargain with brilliance, but Henry falls in love with the wife. As he is drawn deeper and deeper into Karen's world he realizes that she is quite mad. Somehow he must escape from her and win the long suffering Imogen from her cad of a husband.

A play in two parts/segments. The Revengers' Comedies is usually performed on two successive evenings since each segment is over two hours long.
REVIEWS:

"Shows Ayckbourn's rare gift for combining moral fevour with the ability to wring from us tears of helpless laughter."