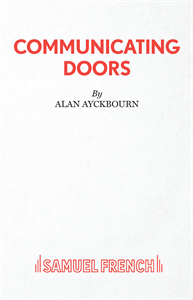 A London sex specialist from the future stumbles into a murder plot that sends her, compliments of a unique set of hotel doors, travelling back in time. She and two women who were murdered in 1998 and 1978 race back and forth in time trying to rewrite history and prevent their own violent ends.

The frantic race begins when Poopay is hired for an evening at the Regal Hotel by an old man who eschews a fling in favor of confessing his role in the demise of his wives.

Now a target, Poopay flees into the vestibule and somehow triggers the time machine.
REVIEWS:

"A real knockout... A vastly entertaining blend of the West End drawing room thriller with one of Priestly's old time plays, where characters go whirling throughout time. Of course, Ayckbourn has added innumerable piquant and bizarre details of his own... This is a show to see."