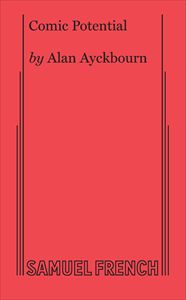 "Comic Potential hurts you with the sheer exuberance of its laughter and liberates you with its seriousness."

A sensation in London and New York, this is one of the funniest and most inventive plays by Britain's grand master of comedy.

A hilarious satire of television and a touching romantic comedy, it begins in a television studio where a hospital soap opera is being taped. One actor starts speaking gibberish; he is an "actoid" a robot and his programming is off kilter.

Adam, the young nephew of the producer and an aspiring writer who worships the director (once a great movie director and now a broken down has been), is on the set. Adam starts chatting with Jacie Tripplethree, the actoid (serial numer JC333) playing the nurse and finds, to his surprise, that not only can she carry a conversation but, due to what she calls a fault in her programming, she has a creative imagination.

Adam wants to build a new television series around her bu the studio will not hear of it. He also finds he is falling in love with the charming robot!

Will Adam get the green light on his series? Will love prevail?

Jacie is one of Ayckbourn's greatest characters; her portrayer won all of London's major acting awards.
REVIEWS:

"Comic Potential hurts you with the sheer exuberance of its laughter and liberates you with it seriousness."