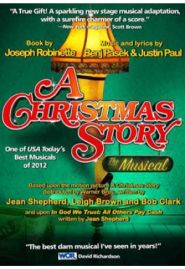 A Christmas Story, The Musical


This musical, which received rave reviews on its Broadway run, is based on the movie classic that runs round-the-clock on television every Christmas.

Set in the 1940s in the fictional town of Homan, Indiana, the musical follows 9-year-old Ralphie Parker and his quest for the Holy Grail of Christmas gifts -- an Official Red Ryder carbine-action 200-shot Range Model air rifle. Rebuffed at every turn with a similar echoing response, Ralphie plots numerous schemes to achieve his desperate desire for the coveted BB gun.

All the iconic scenes from the movie are here: Ralphie's friend, Flick, getting his tongue stuck to the flagpole; his brother, Randy, getting dressed in his snowsuit; the bullies, Farkus and Dill; the leg lamp award; the bunny suit; the Chinese restaurant; Christmas dinner; and many others.

The delightfully versatile score ranges from gentle ballads to show-stopping full-ensemble numbers such as "Ralphie to the Rescue!," "A Major Award," "Sticky Situation," "Up on Santa's Lap," "Somewhere Hovering Over Indiana" and the inevitable "You'll Shoot Your Eye Out!"

A Christmas Story, The Musical will bring an exciting new dimension to those who have seen the movie and will certainly stand on its own for those who haven't.
REVIEWS:

"Joyous! ...A musical that dares mess with one of the most popular Christmas movies of all time and yet manages not only to do the film justice, but top it... It's a charming triumph of imagination."

"A true gift! A sparkling adaptation with a surefire charmer of a score."