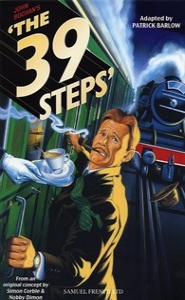 Mix a Hitchcock masterpiece with a juicy spy novel, add a dash of Monty Python and you have The 39 Steps, a fast-paced whodunit for anyone who loves the magic of theatre! This 2-time Tony® and Drama Desk Award-winning treat is packed with nonstop laughs, over 150 zany characters (played by a ridiculously talented cast of 4), an on-stage plane crash, handcuffs, missing fingers and some good old-fashioned romance!

In The 39 Steps, a man with a boring life meets a woman with a thick accent who says she's a spy. When he takes her home, she is murdered. Soon, a mysterious organization called "The 39 Steps" is hot on the man's trail in a nationwide manhunt that climaxes in a death-defying finale! A riotous blend of virtuoso performances and wildly inventive stagecraft, The 39 Steps amounts to an unforgettable evening of pure pleasure!

"Theatre at its finest!... Absurdly enjoyable! This gleefully theatrical riff on Hitchcock's film is fast and frothy, performed by a cast of four that seems like a cast of thousands."

"The most entertaining show on Broadway!"

"A wonderful triumph of theatre!"

The 39 Steps was first produced on stage by North Country Theatre in April 1996 at the Georgian Theatre, Richmond, North Yorkshire. It subsequently toured extensively throughout the UK courtesy of Charles Vance. This latest version, adapted by Patrick Barlow from an original concept by Simon Corble and Nobby Dimon was first performed at the West Yorkshire Playhouse on June 17, 2005.
The 39 Steps was subsequently produced by the Roundabout Theater Company. It premiered on Broadway on January 15, 2008 at the American Airlines Theater, directed by Maria Aitken.