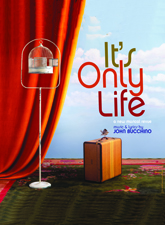 John Bucchino’s songs have been recorded and performed by Judy Collins, Patti LuPone, Yo-Yo Ma, Audra MacDonald, Liza Minnelli, Art Garfunkel and many others.
Conceived by director Daisy Prince and the award-winning songwriter, IT’S ONLY LIFE is a musical revue about longing, fulfillment, loss, triumph and ultimately wisdom. According to the New York Times, Bucchino's 'flowing, finely made piano ballads describe an urban life in which relationships come and go in cycles of yearning, fulfillment, heartbreak and healing' - where romantic love is anticipated with 'high expectations, high anxiety and open hearts.'
The show won LA's 2008 Ovation Award for Best Book/Lyrics/Music for an Original Musical.
REVIEWS:

"As its title suggests, Bucchino's revue takes a look at those moments when life throws us a curve. His lyrics are smart and intelligent (not always the same thing) and his melodies complex yet accessible and yes, even hummable. Performed by a sterling cast imported from New York and directed by the brilliant Daisy Prince, It's Only Life provides a truly gorgeous and thrilling evening of musical theater."

“A new American pop master... Bucchino merges the artfulness and sophistication of America’s master songwriters (Irving Berlin, Jerome Kern, Cole Porter, George Gershwin) with the contemporary style and plaintive folk quality of the top singer/songwriters who emerged in the 1970s, such as Carole King and James Taylor.”

"An original, inspirational and distinctive voice."

"...at his frequent, superlative best he can be as moody as Schubert or jazzed as    Bernstein.”

"John Bucchino's songs are the continuation in the evolution of classic American    popular song.  He is a man of great talent."

"If Tennessee Williams was alive and writing tunes he'd be John Bucchino."

“For lovers of musical theatre, It's Only Life is one of the rare genuine must-sees. And if you're someone who has been thinking about giving musical theatre a shot, you'd be hard pressed to find a better starting point.”

“Mr. Bucchino possesses a singular voice and an absolute integrity of expression.”