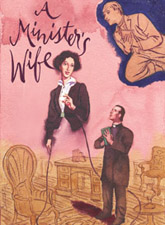 A Minister's Wife, a new musical based on George Bernard Shaw's “Candida,” is set in London in the swirl of a love triangle among energetic, admired Socialist clergyman, Reverend James Morell, his strong-willed and beautiful wife, Candida, and an idealistic young poet, Eugene Marchbanks, who, infatuated with Candida, aims to win her love.


Prossy Garnett arrives at the office of her employer, Anglican minister and Christian Socialist James Mavor Morell, to prepare for the day's work (A Fine October Morning). Morell has just received an urgent missive from the Guild of St. Matthew asking him to reconsider his decision to cancel a speech that evening. He has done so in order to spend the evening with his wife, Candida, who is returning for just one night from their country home, where she has been with their children.

Morell's curate, Lexy Mills, arrives (tardily as usual) and upon studying the letter announces that the only replacement that can be found is the president of the Agnostic League, who insists on the divorce of socialism from Christianity. This being contrary to everything Morell stands for, he reverses his decision to not speak and prepares his speech (Sermon). Morell reconciles with spending only the afternoon with his wife (Candida's Coming Home), who arrives accompanied by a young poet (and nephew to an Earl), Eugene Marchbanks. Marchbanks, Lexy and Morell are all captivated by Candida's charm, while Prossy alone is unimpressed (Enchantment / In Response).

Morell asks Marchbanks to stay for lunch, but the poet explains that Candida asked him to leave, though he doesn't understand why. Morell tries delicately to infer that a husband and wife who haven't seen each other for a while might like privacy for conjugal reasons. Marchbanks is horrified, and professes his love for Candida, and a sparring match results (The First Preaching Match: The Love of a Fool / Kingdom of Heaven / Is It Like This for Her Here Always?). When Marchbanks compares Morell to King David, dancing naked before the ark of God, whipping his followers into a frenzy but foolish in front of his wife, Morell snaps and attacks Marchbanks, who cowers in fear but declares that while he is afraid of violence he is not afraid of a clergyman's ideas, and will fight them.
After lunch, Marchbanks inadvertently changes the settings on Prossy's typewriter just as she walks in. She playfully suggests he thinks of the typewriter as a machine that can make love letters at the turn of a handle. Recognizing a capacity for poetry and love in Prossy, Marchbanks senses a kindred spirit and implores her to open up to him (Shy, Shy, Shy). Prossy reveals that she is in fact in love with Morell. Having believed it impossible for a woman to truly love the minister, Marchbanks is crushed to realize Candida may indeed love her husband.
Alone together for the first time that day, Candida begins teasing Morell, telling him that he works too hard; that his congregants don't really listen to his words anyway; that women come to his sermons only because he is so handsome; and that she thinks Marchbanks is about to fall in love with her (Isn't He Foolish?). When she kisses Morell, he views it as a Judas kiss and begins raving. Marchbanks runs in to see what is wrong, and Candida, embarrassed, busies herself filling the lamps. Marchbanks tells Candida that he would take her far away from her daily routine (Shallops and Scrubbing Brushes), and Morell, seeing his wife's delight in Marchbanks, announces that he is off to give his speech (Off to the Guild of St. Matthew), leaving Candida alone with Marchbanks in a test of their marriage.
In the twilight, Eugene reads poetry to Candida. He places his head in her lap and calls her by her first name, and she, believing this to be an innocent and naive declaration of love, gently navigates him through the moment with kindness and integrity, teaching him that he can love her without shame and that she can love him back without compromising her marriage vows (At the Gate of Heaven / Candida, Candida!).

When Morell returns he demands that Marchbanks tell him what has happened in his absence (The Second Preaching Match). Marchbanks claims that he seeks only Candida's happiness, but Morell doubts the poet understands her. Prossy and Lexyburst in, quite tipsy, their animosity toward each other having become quite the opposite, raising the temperature in the room (Champagne). Morell declares that his wife must choose between himself and Marchbanks, and Candida plays along (The Bids for Candida).

After Morell offers his strengths and Marchbanks his frailties, Candida makes her choice (Spoiled from the Cradle). Marchbanks, knowing he has lost, claims he carries a greater secret in his heart and disappears Into the Night, leaving Candida and Morell to embrace, while the question of the poet's secret still lingers.