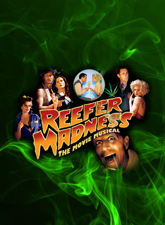 Inspired by the original 1936 film of the same name, this raucous musical comedy takes a tongue-in-cheek look at the hysteria caused when clean-cut kids fall prey to marijuana...

Inspired by the original 1936 film of the same name, this raucous musical comedy takes a tongue-in-cheek look at the hysteria caused when clean-cut kids fall prey to marijuana, leading them on a hysterical downward spiral filled with evil jazz music, sex and violence. You won't be able to resist the spoofy fun of REEFER MADNESS.
The addictive and clever musical numbers range from big Broadway-style showstoppers to swing tunes like "Down at the Ol' Five and Dime" and the Vegas-style "Listen to Jesus, Jimmy," featuring J.C. Himself leading a chorus of showgirl angels. This dynamic show will go straight to your head!
REEFER MADNESS is a highly stylized and satirical political commentary. It contains adult humor, religious parody, and drug use, as well as suggested violence and sexual explicitness.
It therefore may be inappropriate for younger performers and audiences.
REVIEWS:

"REEFER MADNESS...is deliberately outlandish and silly. And that's what makes it so good...[the show includes] a dozen or so over-the-top and hilarious production numbers."

"A delirious romp, which at its best reaches highs of intoxicating goofiness."

"The musical stage version of REEFER MADNESS! really deserves to be a phenomenon unto itself.  You don't even have to inhale to enjoy it."

"REEFER MADNESS: THE MUSICAL broadly expands on the skeleton plot of the original film and turns it into a deliciously campy, wickedly funny romp… This show combines the main character from Godspell with the kinkiness of The Rocky Horror Show and the traditional musical theatre aesthetic of A Chorus Line…"

Premiere Production: In 2001, the musical Reefer Madness opened off-Boradway after its development and successful run in Los Angeles.