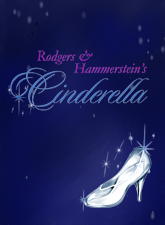 The timeless enchantment of a magical fairy tale is reborn with the Rodgers & Hammerstein hallmarks of originality, charm and elegance.
Originally presented on television in 1957 starring Julie Andrews, Rodgers & Hammerstein's Cinderella was the most widely viewed program in the history of the medium. Its recreation in 1965 starring Lesley Ann Warren was no less successful in transporting a new generation to the miraculous Kingdom of dreams-come-true, and so was a second remake in 1997, which starred Brandy was Cinderella and Whitney Houston as her Fairy Godmother.
As adapted for the stage, with great warmth and more than a touch of hilarity, the hearts of children and adults alike still soar when the slipper fits.

As a kingdom celebrates its Prince's decision to give a ball for the express purpose of finding a bride, Cinderella's two stepsisters and their mother enter. This less-than-lovable trio is followed by what seems to be a large pile of packages, but in fact is Cinderella carrying the ladies' call gowns, frills and frou frou from a successful shopping spree. Cinderella, it becomes apparent when they arrive home, will have the formidable job of making the Stepmother and Stepsisters beautiful for the ball -- in addition to her other jobs, which include cooking, sewing, cleaning, washing and everything else imaginable. Although she won't be allowed to go to the ball herself, Cinderella is happy for the others. She always tries to be cheerful and never complains. Sometimes, however, she retreats to her "own little corner" and dreams of a more exciting life.

The Queen and King are not in complete agreement about the Prince's ball (which should in fact be called the Queen's ball, since it is entirely her idea). The King doesn't want to have it all, since it will be a great deal of trouble, a large expense, and why would a red-blooded boy want to get married in the first place? But the Queen has her heart set on it, and neither the King not the Prince (who dreads the whole idea) can bear to disappoint her. The preparations continue.

On the night of the ball, Cinderella helps the Stepmother and Stepsisters get ready. After they leave, she sits alone in her corner and imagines what it might be like at the ball. She's not alone for long, however, for her Godmother appears at the window. Despite this lady's sensible looks and practical manner, she is no ordinary godmother, though Cinderella doesn't suspect this. With help from the Godmother's "fol-de-rol" and "fiddley dee," Cinderella is magically transformed for the ball. Her carriage, changed from a pumpkin, drawn by the horses that were mice a moment before, whisks her to the palace.

The ball is the ball that everyone remembers from their storybooks, and Cinderella is the most beautiful of Princesses. Does she captivate everyone at the palace? She does! Do she and the Prince fall in love? They do! Must she flee at midnight before her carriage changes back into a pumpkin? She must!

Before she escapes, Cinderella loses her slipper, which the Prince retrieves. It is his only clue to finding her again, and he mounts a search for the foot that fits the slipper. All efforts are in vain, however. Even at the Stepmother's house, the Godmother's efforts to intervene for Cinderella are fruitless for Cinderella is nowhere to be found.

Meanwhile, the Prince has been trying to convince his mother (and himself) that he is not in love with a dream, but with a real girl, even if she has disappeared. When he is told that no one can be found whose foot fits the slipper, he is shattered. In anger he tosses the slipper into the bushes.

Cinderella, who herself can hardly believe her memories of the ball, has returned to the palace garden, hoping to recapture the magic of the night before, if only in her mind. The Prince stops her, but hardly recognizes the vision of loveliness he danced with underneath Cinderella's sooty clothes and dirty face. She is embarrassed to be seen by him and tries to leave. For a moment it looks as if the story will end unhappily as she walks away, but at the last moment the Prince thinks to try the slipper on her foot (after the Godmother retrieves it and places it next to him). And, of course, the slipper fits.

Almost immediately the Royal Wedding begins. As the curtain falls on the happy couple, the Godmother reminds everyone that "Impossible things are happening every day."
REVIEWS:

"Gossamer and magic! The score soars...CINDERELLA is a good show for kids."

"CINDERELLA is a thorough, total delight, full to overflowing with magic and romance."

"CINDERELLA sparkles! The Rodgers and Hammerstein score is delightful."

"There is magic in what they did, as though a fairy's wand has touched it all and made it sing and shine."

"CINDERELLA's magic triumphs...The score is as enchanting as ever!"

Premiere Production: In 1957 Rodgers & Hammerstein's only musical for television, Cinderella, was broadcast live on CBS-TV before an estimated audience of 107 million. Julie Andrews starred in the role of Cinderella.
In 1958, the stage premiere of Rodgers & Hammerstein's television musical Cinderella was presented by Harold Fielding at London's Coliseum in the style of a traditional English pantomime, starring Tommy Steele.