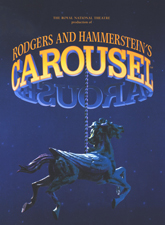 In a Maine coastal village toward the end of the 19th century, the swaggering and carefree carnival barker, Billy Bigelow, captivates and marries the naive milworker, Julie Jordan. Billy loses his job just as he learns that Julie is pregnant and, desperately intent upon providing a decent life for his family, he is coerced into being an accomplice to a robbery. Caught in the act and facing the certainty of prison, he takes his own life and his sent 'up there.'
Billy is allowed to return to earth for one day fifteen years later, and he encounters his daughter he never knew. She is a lonely, friendless teenager, her father's reputation as a thief and a bully having haunted her throughout her young life. How Billy instills in both the child and her mother a sense of hope and dignity is a dramatic testimony to the power of love.
It's easy to understand why, of all the shows they created, CAROUSEL was Rodgers & Hammerstein's personal favorite.

The time is 1873. The place, a small fishing village on the rocky New England coastline. Billy Bigalow, the handsome and swaggering barker for Mrs. Mullin's carousel in the local amusement park, meets Julie Jordan, a lovely young working girl at the nearby mill, when Julie and her friend Carrie Pipperidge come to the carousel. Billy and Julie fall in love and are soon married.

Everyone, it seems is against this union -- the townspeople caution Julie and Billy is warned, and even threatened by his boss, Mrs. Mullin, who is jealously in love with him. Because of the marriage, Billy loses his job. Thereupon he becomes sullen and difficult, raging bitterly and bullying his wife -- until Julie quietly informs Billy that he is about to become a father.

Desperately anxious to provide for the coming child, Billy is persuaded by Jigger, a shiftless sailor, to take part in a hold-up. The robbery attempt is thwarted; Jigger escapes, but Billy is caught by Mr. Bascombe, the would-be victim, who vows to hand him over to the police with the prospect of a long prison term. Cornered, disgraced and terrified for Julie and their unborn child, Billy kills himself. Julie arrives on the scene and cradles Billy as he dies in her arms.

Fifteen years pass. Billy, escorted by a Heavenly Friend, arrives in the backyard of Heaven. Here he meets The Starkeeper, who informs him that he will never get into Heaven until he redeems himself. After some argument, Billy is given a chance. He is allowed to return to Earth for one day, during which he must perform one good deed. Afforded a glimpse of Louise, his lonely and unhappy fifteen-year-old daughter, Billy steals a star to give to her at their first meeting. But back on Earth, he is still the rough blunder. Louise is shy and won't accept his gift. Unable to reach her in any other way, Billy slaps his daughter -- but the sting feels miraculously like a kiss to the girl. Louise explains this to her mother, Julie, who also sees the star that Billy has left behind, and instinctively, Julie understands.

Nevertheless, Billy has not yet performed his good deed, and the slap should have been his final straw. But Billy persuades the Starkeeper to give him one last chance. Unseen, Billy watched Louise at her high school graduation. He observes his daughter's self-doubts, her insecurities. Invisibly, spiritually, Billy reaches out to her; he urges her to believe in herself, and his is filled with pride as he watches his daughter blossom with confidence. Turning to Julie, Billy says simply, "I love you, Julie. Know that I love you." And Julie, somehow, hears him. She joins Louise and the rest of the townsfolk in singing "You'll Never Walk Alone" as Billy heads towards heaven.
REVIEWS:

"CAROUSEL will be 50 next year, but as of this morning, it is the freshest, most innovative musical on Broadway. It is also the most beautiful."

"It still makes an emotional impact and is as relevant today as ever."

"As close to perfection as musical theater gets...At the end of CAROUSEL, the communal heft of this theatergoing experience will ensure that you won't be walking alone."

"Beautiful, bountiful, beguiling...it is the product of taste, imagination and skill."

"BEST MUSICAL OF THE CENTURY!"

"The audience is awash in the optimistic glow of Oscar Hammerstein's words and the glory of Richard Rodgers' music, beyond all reason. And CAROUSEL cements its estate in musical theatre heaven."

In 1945 the world premiere of Carousel was presented at the Shubert Theatre, New Haven.

In 1945 Carousel opened at the Majestic Theatre, New York, where it ran for 890 performances.

In 1994, the revival of Carousel at the Lincoln Center Theatre opened for a run of 337 performances, winning five Tony Awards.