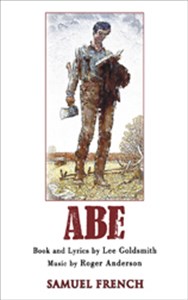 "The founding fathers for their own musical with 1776, so why not Abe?"


Abe is a new musical about the early life of Abraham Lincoln. The show explores his youth as a flatboat pilot on the Mississippi, his early love for Ann Rutledge, his troubled marriage to the difficult and mentally fragile Mary Todd, and his attempt to be a good father to his sons. The story follows Abe from his earliest attempts at self-improvement through the 1860 election which made him the 16th president of an already fracturing United States.

"The founding fathers got their own musical with 1776, so why not Abe?"

Premiere Production: Abe was first presented on February 20, 2009 at The Oakley-Lindsay Civic Center in Quincy, Illinois by The Muddy RiverOpera Company.