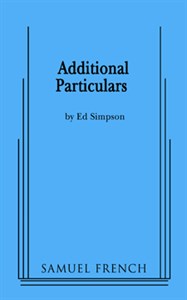 Explores the intersecting lives of four 'Save-a-Bundle Discount Mart' employees: Glenda Balitski, an optimistic but lonely young woman who works in housewares; Assistant Manager Warren Grippo, a generous but awkward man of unflagging good manners; Raymond Fetterman, a maintenance man and a former 'Employee of the Month;' and Kenny Hinkle, a good-natured and sympathetic younger co-worker.

The intersecting lives of four 'Save-a-Bundle Discount Mart' employees are explored in Additional Particulars.
In the first act, Glenda Balitski, an optimistic but lonely young woman who works in housewares, has recently moved into her tidy apartment after the death of her invalid mother. Assistant Manager Warren Grippo, a generous but awkward man of unflagging good manners, has unexpectedly dropped by Glenda's apartment after work.
After the lonely couple discovers a shared enthusiasm for the corporate ideals of 'Save-a-Bundle,' Warren reveals that Glenda has been chosen 'Employee of the Month...' and confesses his desire to discuss with her some 'additional particulars' of a more personal nature.
Meanwhile, Raymond Fetterman, a maintenance man and himself a former 'Employee of the Month' is having lunch with his young friend and co-worker, Kenny Hinkle. It is the eve of Raymond's 47th birthday, he's trapped in a job he hates, and Raymond has come to the painful realization that time is quickly running out on his chances of 'having a life.'
As Raymond desperately yearns to escape the monotony of his life, the good-natured Kenny sympathetically listens...and harbors a heartbreaking secret of his own.
REVIEWS:

...Human comedy par excellence, as if Chekhov were reincarnated in America’s Wal-Mart culture....Simpson’s sympathy and affection for (his character’s) weaknesses are signs of that rare combination of a humanist with a genuine sense of humor.

...Witty and insightful...not just a very funny show, but an unexpectedly poignant and decidedly human one as well....Simpson writes with an unusual degree of humanity...

Additional Particulars Triumphs....Written with down to earth humor and heart-rending compassion...A peek at the heartland of America, this stunningly beautiful script captures the audience, and tugs at their heartstrings...

...Poignantly funny...Full of angst and unfulfilled desires, Simpson’s characters are heartbreakingly imperfect. Yet under the darkness, Simpson’s works shine with an essential sweetness that is often a rarity in modern theater” - F. Kathleen Foley, Los Angeles Times “...Enchanting...delightfully funny and heartrending...With humor and despair always just a millisecond apart, Simpson’s understated style aims squarely at the heart of working-class ennui and scores a bull’s eye. This is a playwright worth watching.

Big hearted... Additional Particulars... can easily join the ranks of those classic, timeless hymns to quiet humor and the human experience... The laughs are earned, not cheap. The tears are real, not manipulated.

Premiere Production: Additional Particulars was first produced by The Occasional Theater, in association with Hothouse Peonies, and The West End, at Third Stage in Los Angeles, on May 13, 2000. It was directed by Michael Lilly. The play was developed at Keystone Repertory Theater, at Indiana University of Pennsylvania, under artistic director Barbara Blackledge.