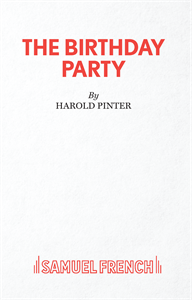 "Fascinating capacity to be menacing, ominous and evocative of some dark and threatening doom."

In a small house at a coastal resort live a man, his mentally wayward wife and their boarder who has been with them for a year. He is a strange chap, unkempt and in flight from we know not what.

Enter an even stranger Jewish man and his muscle bound Irish henchman.

The mentally immature wife accommodates them with a room and then decides that it is time for the boarder to have a birthday. At the party she arranges, the new guests play cruel games with the boarder; break his glasses, make a buffoon of him, and push him over the psychotic precipice.

The next morning he is reduced to a gibbering idiot and meekly leaves with them.
REVIEWS:

"Fascinating capacity to be menacing, ominous and evocative of some dark and threatening doom."

"The most interesting play to be seen on Broadway."

Premiere Production: The Birthday Party premiered at the Arts Theatre in Cambridge, England, on April 28, 1958.