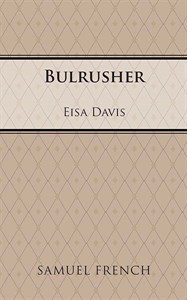 In 1955, in the redwood country north of San Francisco, a multiracial girl grows up in a predominantly white town whose residents pepper their speech with the historical dialect of Boontling.

Found floating in a basket on the river as an infant, Bulrusher is an orphan with a gift for clairvoyance that makes her feel like a stranger even amongst the strange: the taciturn schoolteacher who adopted her, the madam who runs her brothel with a fierce discipline, the logger with a zest for horses and women, and the guitar-slinging boy who is after Bulrusher's heart. Just when she thought her world might close in on her, she discovers an entirely new sense of self when a black girl from Alabama comes to town.

Passionate, lyrical, and chock full of down-home humor, this play is an unforgettable experience by a new, thrilling voice.
REVIEWS:

Davis has powers as a writer to find beauty in almost everything, and her play pulses with compassion and life. Bulrusher has the kind of satisfying, uplifting ending you can only find in live theater — vibrant, poetic, immediate and thrilling.

Davis explores her themes in unexpected and evocative ways...The still waters of Bulrusher turn out to run pretty deep.

...an engrossing rush...Eisa Davis' gleaming marriage of poetry and myth... has a big heart and a wide-open soul.' – Minneapolis-St. Paul Star Tribune'Mixing together issues of family, heritage, race and love, Eisa Davis' Bulrusher delivers a powerful impact with a poetic, deeply realized script and story. In the hands of director Marion McClinton...the work becomes transcendent.