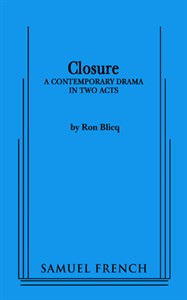 How closure is finally achieved makes this a gripping drama of four generations – and how the youngest can bring out the best in the oldest.


Donald Barlow, who lives in Nottingham, England, decides to search for his father who, he has discovered, was a visiting Canadian serviceman during World War II. Following his mother's death, Donald engages a search agency to find his father (Gordon Devereaux) and establish contact. But when the agency does find Devereaux, the elderly man vehemently denies his involvement with Donald's mother and categorically refuses to meet the man who claims to be his son.

Donald's journalist daughter Claire refuses to give up and, using her married name, flies to Canada to meet and interview Devereaux. She takes her nine year-old son with her (who actually is Devereaux's great-grandson) and a unique and unexpected friendship develops between the crusty old man and the boy.

Although Claire had not intended to reveal the connection between them, she now privately telephones her father and suggests he fly to Canada. Yet her secret plan is shattered when the boy tells Devereaux things about his family, from which the old man deduces the connection and recognizes he has been duped. This sets in motion a vicious and seemingly irreversible conflict between Claire and Devereaux.

The two men do eventually face each other, but both are angry and unforgiving.
REVIEWS:

How closure is finally achieved makes this a gripping drama of four generations – and how the youngest can bring out the best in the oldest.

Premiere Production: The inaugural production of Closure was presented by GADOC (the Guernsey Amateur Dramatic and Operatic Club) at the Beu Sejour Centre in Guernsey, UK, 25 to 28 October, 2005.