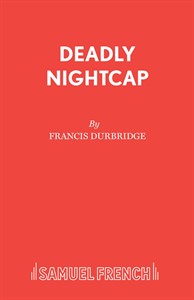 Murder and mystery abound in this ingenious play with more than its fair share of blind alleys.

Murder and mystery abound in this ingenious play with more than its fair share of blind alleys.

A greedy husband plots to kill his wife and make it look like suicide. His plans are thwarted: he, not his wife, ends up dead. But how and by whom? Even though the investigation led by Cliff Jordan concludes Jack was murdered by a prowler, there are so many possible suspects and motives that the truth is elusive.

The London critics said "a night to remember for any fan of mystery, murder and edge of your seat suspense" and "if you enjoy the very best of thrillers, see Deadly Nightcap, it's the best."


Premiere Production: Deadly Nightcap was first presented at the Yvonne Arnaud Theatre on July 6th, 1983. Directed by Val May.