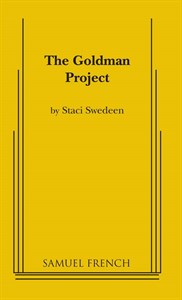 Introducing Naomi, a Romanian-born widow, as a lovably comic, more than a little stereotypical character...a smart decision on the part of Staci Swedeen

It is 1994 and Naomi Goldman, recently widowed, is living in an apartment in upper Manhattan. Her son Tony, separated from his wife, lives with her.
When Tony's old college girlfriend Aviva contacts him with the ulterior motive of interviewing and videotaping his mother for a Holocaust memorial project, Tony is appalled. Naomi, reluctant at first, eventually agrees to the interview. Though appearing to be forthright in her story Naomi clearly is hiding a devastating secret. When Aviva pushes her to admit the truth the consequences are life-changing.
The Goldman Project is a play about family relations, the lingering legacy of the Holocaust and the catharsis of self-renewal.
REVIEWS:

Introducing Naomi, a Romanian-born widow, as a lovably comic, more than a little stereotypical character...a smart decision on the part of Staci Swedeen

Swedeen has an ear for dialogue, even the passages in Yiddish fit the moment nicely. (Don't worry: The Yiddish is instantly translated in the course of the conversation.)

This fine play is less about the past than about living with honesty in the present.