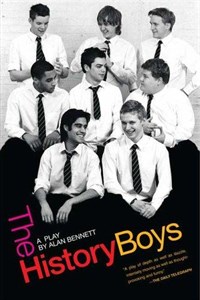 Nothing could diminish the incendiary achievement of this subtle, deep-wrought and immensely funny play about the value and meaning of education...In short, a superb, life-enhancing play.

An unruly bunch of bright, funny sixth-form (senior) boys in a British boarding school are, as such boys will be, in pursuit of sex, sport, and a place at a good university - generally in that order. In all their efforts, they are helped and hindered, enlightened and bemused, by a maverick English teacher who seeks to broaden their horizons in sometimes undefined ways, and by a young history teacher who questions the methods, as well as the aim, of their schooling.
In The History Boys, Alan Bennett raises - with gentle wit and pitch-perfect command of character - not only universal questions about the nature of history and how it is taught but also questions about the purpose of education today. Following a sold out run in London, The History Boys premiered on Broadway in April 2006 taking the Tony Award as Best Play of the Season.
REVIEWS:

Madly enjoyable...moves with a breezy narrative swagger that transcends cultural barriers...Musical numbers, video sequences, scholarly debates, the acting-out of vintage movie scenes, moments of shocking emotional nakedness and wry internal monologues travel cheek by jowl here...Mr. Bennet's dialogue [is] as shimmering and warming as a fine Cognac...As befits a play about precocious, irreverent students...The History Boys is a bright brooder with a strong streak of the showoff

Nothing could diminish the incendiary achievement of this subtle, deep-wrought and immensely funny play about the value and meaning of education...In short, a superb, life-enhancing play.

Brilliantly funny...The History Boys is moving, disquieting: one follows it with a heart brimful...[Bennett's] finest work in decades.

Premiere Production: The History Boys was first presented by the National Theatre at the Lyttleton Theatre in London on May 18, 2004. It was directed by Nicholas Hytner. The play was subsequently presented on Broadway at the Broadhurst Theatre in New York City on April 23, 2006. It was also directed by Mr. Hytner.