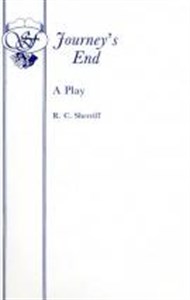 The greatest of all English war plays, Journey's End shows the effect of war on a group of young officers.


R.C. Sherriff's ground-breaking play remains one of the most powerful and successful pieces of modern drama and one of the most acclaimed examples of literature that deals with the tragedy and horror of conflict.

Set over the course of four days leading up to a massive German attack on the British trenches in 1917, Journey's End charts the tension and claustrophobia as the new recruit to the company, Lieutenant Raleigh, discovers that Captain Stanhope, his former childhood friend and hero, has changed almost beyond recognition.
REVIEWS:

"The play draws its power from the detail... incomparably moving."

"The greatest of all war plays."

"[A] sublime play... Excellent performances and a corkscrew of tension, emotion and drama left not a dry eye in the house."

"Recent revivals have suggested that Sherriff's drama remains as hard-hitting and fresh as ever."

First produced by the Incorporated Stage Society at the Apollo Theatre, London, W.C., December 9th, 1928, and subsequently at the Savoy Theatre, Strand, London, W.C. January 21st, 1929.
The play was revived in 2004 and again in 2011 in productions directed by David Grindley.