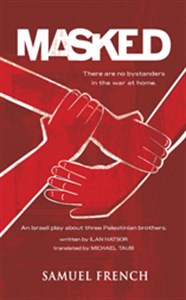 Powerful! Remarkably of the moment...


An explosive Israeli play about three Palestinian brothers. Set during the Intifada with the Israeli-Arab struggle as its backdrop, Masked depicts the tragedy of one family torn between duty, kinship, principles and survival.
REVIEWS:

Provocative drama. An articulate calculus of loyalty and betrayal.

Powerful tragedy...Its real strength may be in the way its nuanced characters muddy notions of right and wrong.

Powerful! Remarkably of the moment...

Premiere Production: Masked had its New York premiere at the DR2 Theatre in August 2007 under the direction of Ami Dayan.