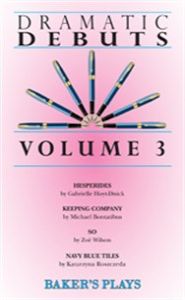 Sophie Davis was not expecting the day her former lover would show up at her doorstep, but now that he had, she is determined to prove she has moved on.

When the door of Sophie's bakery opens after hours, she expects to see a hungry customer, looking for a late-night sugar fix. Instead, she finds Vincent, her long-absent first love, whom she met in that very same spot years ago.

In the time since Vincent left to join the army, almost everything about the place has changed, but one navy blue tile - a relic from those years - signals that something in their relationship has not.


Premiere Production: Navy Blue Tiles was performed at Imperial Theatre in New York City on June 14, 2010 by members of the Actor's Guild.