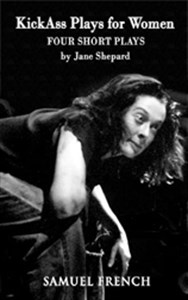 The kind of incredibly brilliant, piercing story that feels like skipping the cup of coffee and going straight to speed.


Two women held in a life-threatening situation and the mind games they play to keep one another alive. Held in a room and chained apart, their only currency is words, and balance of power is everything when a single word becomes the hanging point between life and death.

"Nine is a riveting, focused, and ultimately loving look at the power of human relationships to overcome the most inhumane circumstances. Jane Shepard has achieved the impossible task of linking the most grim with the most noble aspects of the human spirit. Nine left me breathless!"

One of the most amazing character dramas this critic has ever seen. Nine is the kind of incredibly brilliant, piercing story that feels like skipping the cup of coffee and going straight to speed.

Premiere Production: Nine was originally produced at the Circle Rep Lab in New York City in March, 1995. It was directed by Michele Coleman. The production was subsequently invited to run at the Currican Theater in New York, and the play was later turned into a film, produced and directed by the author.

1 - tends to be a cooler personality, capable of remoteness
2 - warmer, with a slight tendency toward dependence
Both women are smart, resourceful, and capable of humor in the face of adversity.