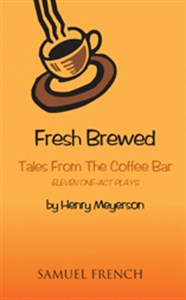 Can two needy people find happiness over a cherry Danish?


Can two needy people find happiness over a cherry Danish?
Published in the collection Fresh Brewed: Tales From the Coffee Bar.

ALLEN - 20a-30s; nerdish in too short pants and too white socks and black framed glasses.
CARMEN - 20s-30s; same age as ALLEN, has the appearance of an unmade bed; hair and clothes in as much disarray as her life.